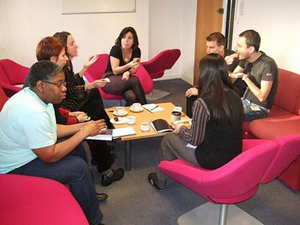 The conversation seems to go round in circles. Actually, it would be more accurate to say it meanders all over the place. The participants do seem to be talking about one subject though. After all, they’re using the same words.

But they’re not talking about the same thing at all.

And so the conversation doesn’t make much sense and the result is a fog.

The reason is, of course, words mean different things to different people, and they automatically attach the meaning they know to what’s said. All these different meanings have their place, to be fair, but we need to make clear which one we have in mind.

Take “leadership”, for example—one of the most talked about themes in the world today. Unfortunately, also one of the words interpreted in many different ways, such as…

That’s just a few of the possible interpretations. The problem is we may not realise how different our understanding can be.

In another example, we tend to talk about measures and targets interchangeably as if they’re the same thing. They’re not. Measures help us learn about a process, and generally are helpful. Targets, on the other hand, are much more controversial. Do they lead to the desired outcomes or do they make them less likely? Talk in a muddled way about targets and measures without distinguishing between them and we have little hope of making progress.

It’s wise to assume our words have a wider range of meanings than we realise and state the one we mean (as well as our respect for the rest).

If you want a fruitful conversation; take time to make clear what you’re talking about.